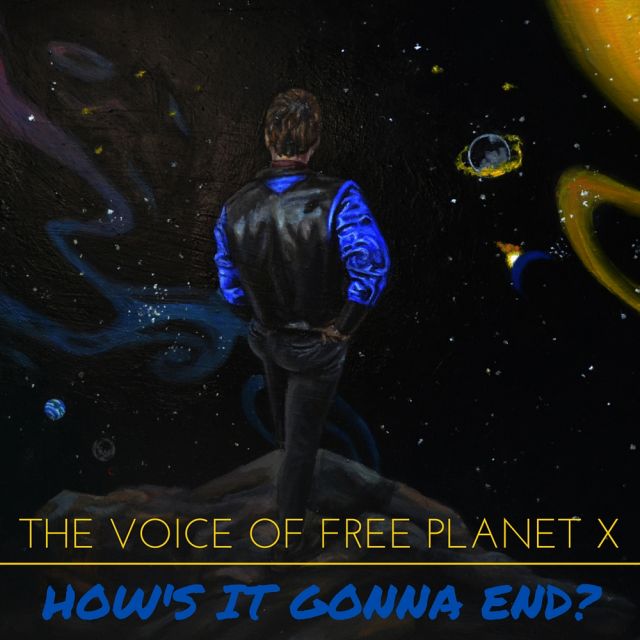 “How’s It Gonna End” is a weird episode. I mean, they all are. VFPX is nothing if not an odd show, start to finish. But “How’s It Gonna End,” is odd beast even among those. For one, I take an active role in this one, instead of just asking questions (though I do ask a lot of questions). It’s full of continuity bits and pieces, callbacks to episodes from months ago like “Paused” and “Mistaking Our Mirrors,” and bit more information on the show’s lurking boogeyman. It’s a story about time, about endings, and finishes with that eternal symbol of unfinished business, the answering machine message. It’s a weird episode, of a weird show.

Because of that, it’s one of my favorites. Your mileage may vary, but I love it, weirdness and all.

Also, how great is that painting Avalon Batory did for the episode? She’s a wonder, she is. I wish you guys could see the painting in person. Digital copies do not it justice.

Part of the reason this episode is so great is the cast, the largest one yet. It’s pretty much an all-star cast of my favorite web entertainments: Jason Banks of Talk Nerdy 2 Me, Phil Thomas of West Phillians, and Christiana Ellis of Space Casey & Five More Minutes join VFPX stalwarts Kennedy Allen of The Black Tribbles  and Chris Morse of Supervillian Corner. Rounding out the cast is Whitney Strix Beltrán, making an impressive VFPX debut as a character we’re going to see a lot of in the future, and Kate Axelrod, who puts the button on the episode with the practiced disdain that can only come from growing up with me as a brother.

Working with all of them was fantastic. I could not have asked for a better cast to close out Season 1. Expect to hear more from every one of them in Season 2.

Those of you who happened to be tuned into G-Town Radio on Christmas Eve may have heard something… familiar. Len Webb managed to make sure everyone had a very merry Planet X-Mas, putting episodes of VFPX on the radio!

Yes, that’s right, VFPX is a radio show, now, in addition to being a podcast. I’ve long been talking about the difference between podcasts and radio shows as being philosophical at best, and here I am, thanks to Len, being able to practice what I preach.

VFPX is going to be on the radio again tonight at 9pm, with G-Town Radio playing “Oddfellows Local” and “My Wife In Hell.” Both of which have Len in prominent roles, so if you like Len–and who doesn’t, after this?–go to the G-Town website and listen to the stream. Show him that VFPX on the radio is a very, very good idea.

Personally, I can’t think of a better way to end the year.

If the year is ending, that must mean it’s the last day to purchase the T-shirt of the Month for December, the shiny metallic logo for Huxley Interplanetary. Chris asked me for this very shirt months ago, and with Chris reprising Huxley Branson for “How’s It Gonna End,” it seemed like a good time to make it available.

There’s some mugs, too, made by request. I’m actually very open to merch requests, so if there’s something you’d like to see in the coming year, drop me a line.

There will be no t-shirt for January, as I am taking the month off. There will be 12 episodes in 2016, just like this year, but they won’t start until February 1st. Creative work, I’ve come to realize, is a lot like farming: Everything happens in seasons. These past couple of months have been all about the harvest, putting this show out for everyone experience. I need to take some winter for myself, to recharge, to let my mental ground go fallow before I plant more seeds. So, no episodes in January. Those of you who support the show with Patreon will not be charged anything for the month.

I’m actually looking forward to it, which is unlike me. I have a tendency to be sorta…non-stop. Often, to the detriment of my physical health. So I’m gonna take January off. Draw some things. Write stuff that isn’t podcast scripts. Watch some movies in the theater instead of on my laptop screen. Finish those books I started in 2015. Or maybe just catch up on my sleep. There’s plenty of ways to spend winter, after all.