Been a busy summer, already. A little exhausting. How are you? 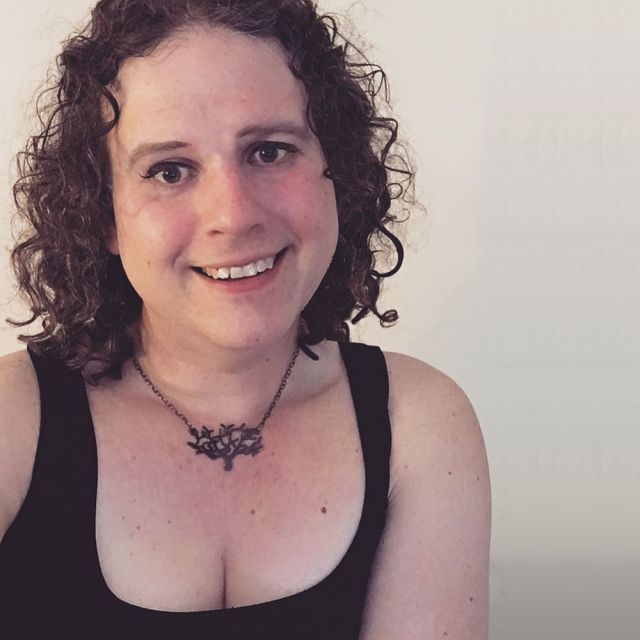 Before I talk about what has happened, let me go into some detail about what WILL happen. Namely, . I will be a guest at Science Fiction Association of Bergen County’s meeting on July 14th  at 7:30pm. It will be at the Barnes & Noble in Paramus, New Jersey, there will be copies of my book, The Battle of Blood & Ink, for sale and I’ll have some freebies to give away, too. I’ll be reading some stuff, talking about myself, basically having a great time. So if you’re in the area, you should come.

I will also have the great honor of inducting Dr. Pamela Gay of the Astronomy Cast into the Podcast Hall of Fame on July 24th. Pamela is an old friend from back in the early days of podcasting when most of us were still trying to figure this whole thing out. Not Pamela, of course. She knew what she was doing from the get-go. I’ve always been a huge admirer of Pamela’s intelligence and compassion, and the way she makes often-opaque ideas beautifully clear. She absolutely deserves this, and I am thrilled to pieces that I get to be a part of it.

But that’s enough of the future. Let’s talk about the past. 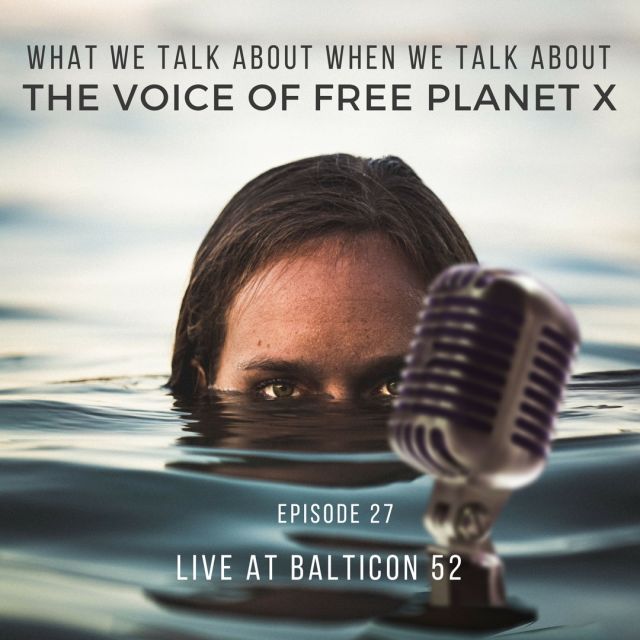 What We Talk About When We Talk About was a live episode recorded at Balticon, the first since Rap Battle Beyond The Stars. It was an attempt to distill the meta-narrative of the past 26 episodes of VFPX, to put everything important in one place, for easy reference, and set the stage for Season 3. Which was a crazy idea, honestly. Just look at all these plot touchstones in the fiction of the show:

I added a few new wrinkles as well, because this list clearly wasn’t apeshit enough. The book I wrote about a murder similar to Hart’s, Shattered Mirror, is now being used as a guide book for similar crimes by a group called “The Gibbering Demiurge.” Oh, and the reason it’s been so long between episodes is that I’ve been in prison.I think that’s everything.

The joy of Balticon shows is being in the same room with old friends that I normally have to record remotely. I went a little nutgalls giving people roles this time, which is why the episode has the largest cast yet. Christiana Ellis does most of the heavy lifting, but she’s amazing, so she handled it with aplomb. And if you’re going to stack a crowd, how can you not include Jason Gregory Banks, Dave Robison, A. F. Grappin, Erin Kazmark, John Walker, Tee Morris, J.R. Blackwell, and Allie Press? We had literally no time to rehearse, and everyone still knocked it out of the park.

There’s a rather nice Q&A session at the end of the recording, too, where I talk a little about my process writing the show and the future of VFPX. There’s people at Balticon who have been following VFPX since the beging–in 2005! Podcasting often feels like tossing out messages in bottles, so it’s nice to be in place were so many people uncorked them for nice read. 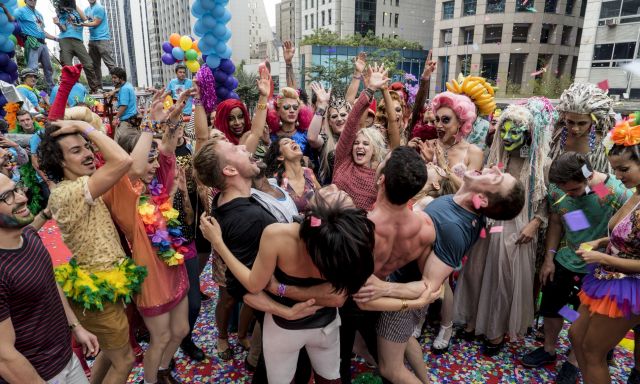 Speaking of nice reads, I’ve got a few of them for you. First off, there’s “The ‘Sense8’ Finale Movie Is A Desperately Needed Trans Fairy Tale & A Fitting Ending For The Show”which I wrote for Bustle. It’s a very personal essay about how powerful representation in media truly is.

While Sense8 is not without its flaws, even those flaws help create the glorious, wildly entertaining, utterly human celebration that is the show. It’s a superhero show where the main power on display is pure empathy, where problems are solved not by destruction, but connection. It is not for everyone. But for those it is for, it is for them very much indeed. It’s a fairy tale disguised as a television show.

We, collectively, do not deserve Sense8.

Bustle asked for a take on the Queer Eye show, so I wrote ‘Queer Eye’ Season 2 Exposes The Fab Five’s Flaws — But That’s The Point, about, well, Queer Eye‘s flaws. And how that’s a good thing.

The original Fab Five were nearly identical Ken dolls who left their identities at the door of whatever pigsty apartment they were tasked with fixing. Only the tamest of sexual innuendos were allowed; no talk of boyfriends, of politics, of how the men they are helping sometimes represented the very people that kept queer people unmarried, unemployed, and fearing for their lives was included.For context, 2003 was the year the body of Richie Phillips was found in a suitcase in Rough River Lake. It was the year Glen Kopitske was stabbed to death by an Eagle Scout. It was the year Gwen Araujo was brutally beaten and strangled by three men because she was transgender. It was the year 15-year-old Sakia Gunn was murdered at a bus stop when she said she was a lesbian. Given that, it can almost be forgiven how intent the original

Queer Eye was on showing how harmless its gay men are.

I also wanted to point your attention to the Anthony Bourdain obituary I wrote for Legacy. He was one of the good ‘uns, and there’s a tremendous void left by his passing.

There’s a scene in the 2015 Miami episode of Anthony Bourdain’s CNN show Parts Unknown where, having tucked into barbecued shrimp and roast pork with Iggy Pop, these two older men who first epitomized and then somehow survived the rock-and-roll lifestyle size each other up on the beach. It’s an oddly moving moment, and very strange to watch now. Bourdain drops his ever-present smirk to try to understand how man who wrestled with so many similar demons has found a strange sort of peace.“You seem like a curious person,” Iggy Pop tells Bourdain, with a weight that reveals how much a compliment this is.

“It’s my only virtue,” Bourdain snaps back, suddenly uncomfortable, a self-depreciating smile on his face.

On a far less serious note, over at Quirk you can read What’s Inside The Handbook for the Recently Deceased from ‘BeetleJuice,’ which I had far too much fun writing.
Honing In On Your Haunt-Style

It is incumbent on every dead person to choose the style of haunting they are most comfortable with. While the more imaginative practitioners of the poltergeist arts may look down their rotting noses upon those prefer to emulate how they looked in life, it should be noted that there is no “best” way to be a ghost. There are merely those who find comfort in mediocrity, and those who wish to push themselves. All you have to do is find out who you are, and be that.

Continuing this humorously morbid streak, feast your eyes on Kill Your Darlings, 101 Pieces of Advice for Writers and Serial Killers. It’s the only guide to writing/murdering you’ll ever need!

54. Get to the juicy parts quickly.

57. Detach yourself from the outcome. It’s about the doing, not the result.

60. Remember, everyone has a reason to live. 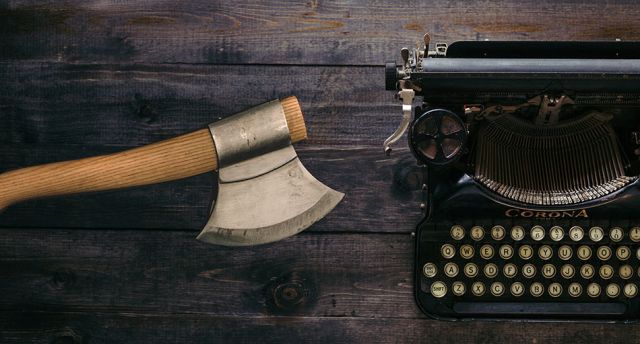 For some reason, I did a Frankenstein’s Support Group For Misunderstood Monsters that was mainly crowd scenes. I thought it came out quite well. 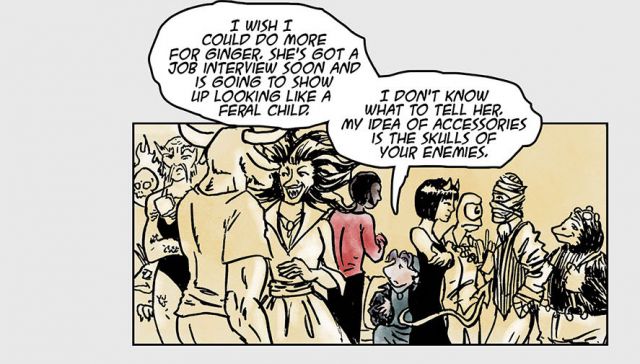 There’s a lot of cool stuff coming down the pike: at least one more VFPX episode, more articles, more comics. Busy summer. But then, I suppose that’s better than the alternative.