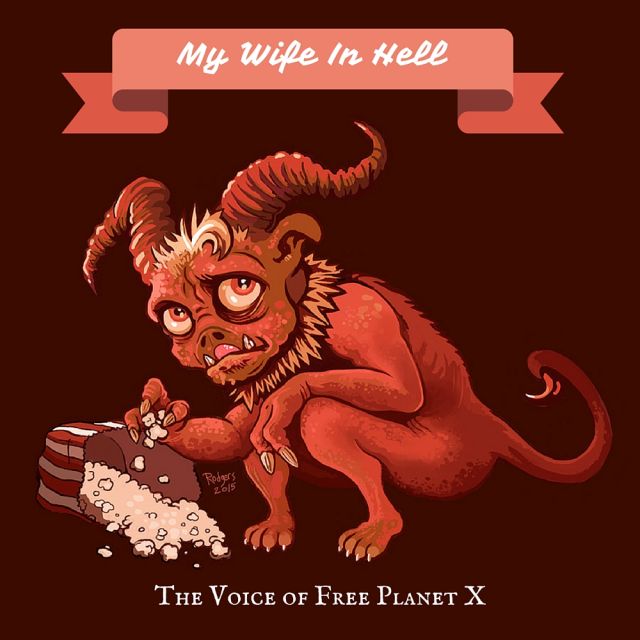 The next to the last episode of the year, the penultimate episode of the 1st season of this new format of the The Voice of Free Planet X, is deeply, unrepentantly silly. The title says as much. “My Wife In Hell.“ It’s almost a pun, for crying out loud. A main character, Gorgah, who you can see in the above illustration by Jennifer Rodgers, is essential a Muppet, speaking as he does in high-pitched, Elmo-esque manner. There’s a loud-mouthed demon who’s exasperation is only matched by his inability to do math. And the Devil throws a Christmas party.

It’s also one of the most personal things I’ve written, filled with my own fears and anxiety. It’s about taking care of a adorable dog…baby…demon, sure. But it’s also about being simultaneously worried about your life changing and not changing, staying in the same place while everything else alters around you.

The two opening scenes, where the Cosmic Hosts wake J.R. and I up, and our first tour of Hell, where I meet Gorgah, is an almost verbatim adaption of a dream I had years ago. I told J.R. about it, and we’ve elaborated on it since, improvising banter between our fictional selves and her demonic co-workers. It became a running play between the two of us, a sort of inside-vaudeville. So much so, the only thing that was written down for the whole is the Christmas party. Those 7 minutes were scripted. The other 63? Oft-rehearsed improv between J.R. and I.

J.R. is, as ever, the best partner anyone could ask for.

Speaking of the extended length of this episode, that was made possible by the Patreon backers. The first milestone was an extra-long episode every year, and this here is the first.

I told myself that I’d consider the Patreon a success if I hit that first milestone by the end of the year. We’ve raised twice that. I am constantly in awe of the generosity of the people who listen to the show.

You folks, in other words. Thank you.

This episode is full of familiar voices–and not just because I do the voices for Gorgah and Eddie. Russell Collins, the man behind the VoFPX theme and the voice of corporate wizardry in Industrial Dark & Magic, lent his delightfully silver-plated tongue to Lucifer, Who Is The Morningstar. I’m making a habit of going to Russell whenever I need someone to be charmingly evil. I supposed there’s worse things to be typecast as…

You may recognize Len Webb’s impressive pipes as the voice of the Cosmic Hosts of Forever. I talked about how great Len is in the last newsletter, but it bears repeating: the man is incandescent with talent. I had no back-up voice in mind for the Cosmic Hosts of Forever; if Len hadn’t been game, I don’t know who I would have chosen instead. Luckily for all of us, he had no problem lending his inherent gravitas to a role that was mainly shouting. Class act, that Len.

Len and the rest of the Black Tribbles held their “Holiday Tribbilee” and, while I cannot speak for everyone, I had a grand time. I was stressing out a bit about what to wear–with good reason, it turned out, as there was some impressive costuming at the party. I ended just making a special necktie for the event. Something simple and understated: 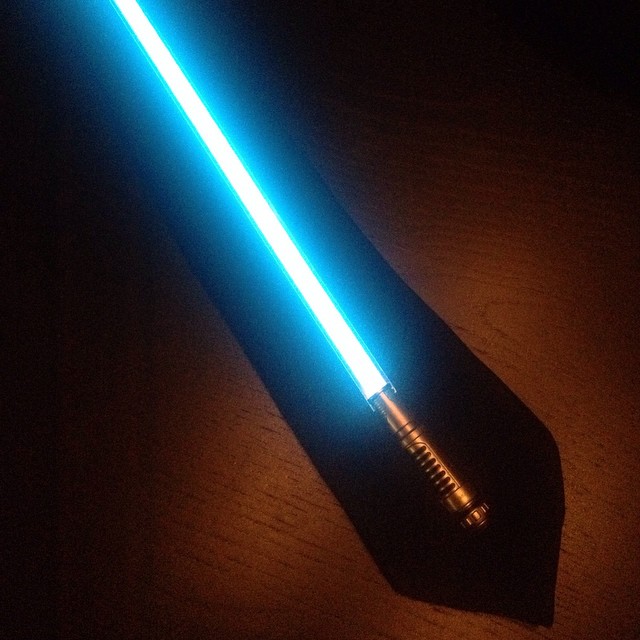 Okay, maybe not understated. But I did look very, very snazzy in it.

I have just made the Annual Southern Migration, and am currently snuggled in with my family NC for X-Mas. I hope, that no matter what holiday you celebrate or have already celebrated (Hanukkah shout-out!) you were/are/will be surrounded by the ones you love, and who love you back. If have one wish this season, it’s that.

Second wish is for one of those Doctor Who Lego TARDIS sets.