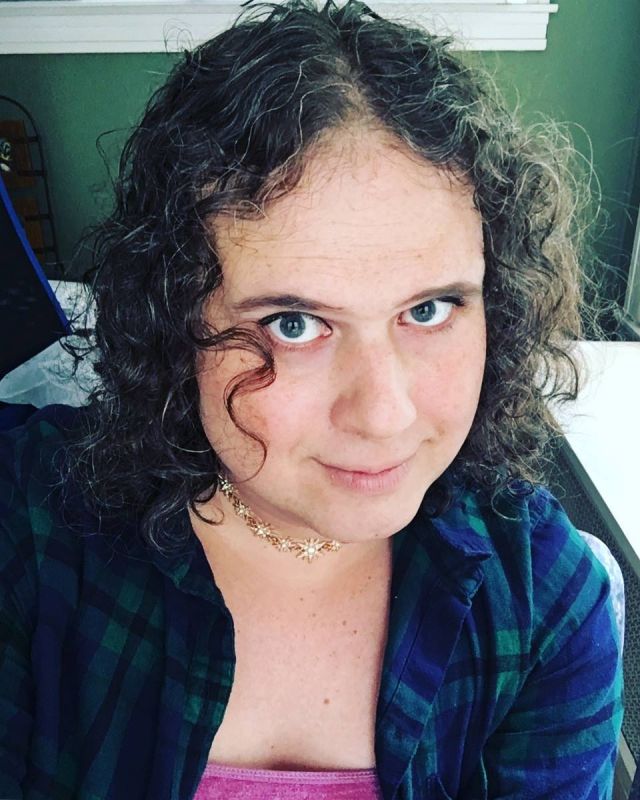 (My desk is right next to the AC unit, so sometimes I get to put on my flannel and pretend that its fall)

Wednesday is walking and moving from two naps to one, which means that I am exhausted and have even less time. And yet, I am taking on two more projects. Because that is what I do.

The first is, naturally, an overly elaborate Halloween costume. Yes, I’m starting in August. I meant to start in July. You don’t get awesome results by waiting until October 1, people. Next year, Wednesday is probably going to want to choose her own costume, so I intend on enjoying dressing her up according to my own design as much as possible. Having achieved Addams Family, this year we’re making Wednesday our own little Frankenstein’s Monster, with the two of us as mad scientists. That way, if next year she wants to be a strawberry or whatever (and let me tell you, I would make the best possible strawberry costume for my baby girl), JR and I will have gotten our Must-Do costumes out of our system.

She really enjoys playing with Batgirl, Harley and Poison Ivy dolls, so I’m crossing my fingers for Halloween 2019.

The second project…shall remain under wraps for now. There’s a lot of moving parts, and I have to rely on other people’s corporation for some of it. It’s rapidly coming together, though, with a speed that’s surprising even eternally impatient me. I’ve clearly found a hole that needed to be filled. Like the Halloween costumes, I’m pushing for an October release, but this also may be something that doesn’t see light until next year. More on that as it comes together. 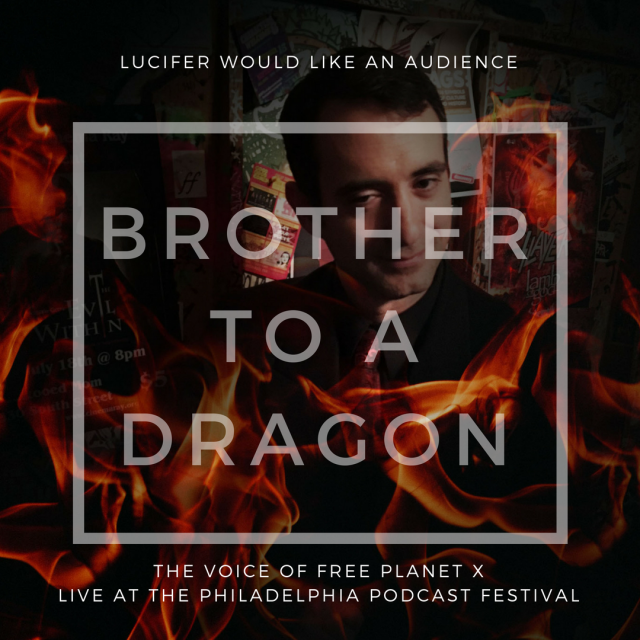 The Voice of Free Planet X live show at Amalgam comics went off without a hitch. Give it a listen if, you haven’t already. The cast–Russell Collins, CJ Higgins of My Gay Agenda, Phil Thomas and Andy Hunter of West Phillians, Jennifer Rodgers, J.R. Blackwell–really gave their all. Especially Russell, who delivers just an utterly heartbreaking monologue about the nature of evil near the end.

II was a little worried about this episodes, because centering the whole show around Lucifer, Who Is The Morningstar means he can’t be the one who just steps in, says a few delightfully cryptic things, and then leaves when he likes. It works for this episode, though, because Lucifer isn’t too comfortable being an interview subject, either. And CJ’s chipper Agent Seven is there to remind us how much everything has changed now that the Deiator is in charge.

The first time the whole cast came together to rehearse was the morning of the show. We ran it through three times, I think? That was all the time we had, what with the demon makeup Sara Gates did, and all. Did I mention the demon makeup? There was demon makeup. 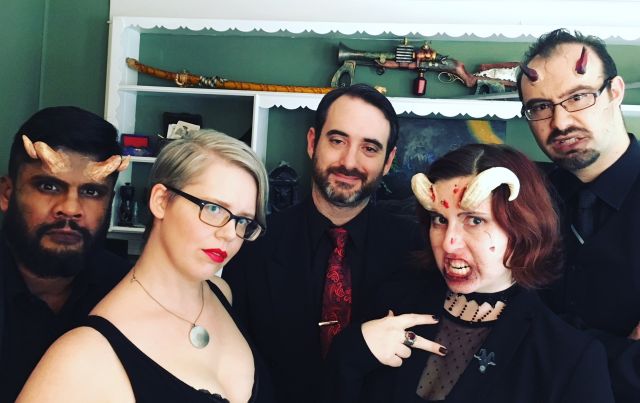 It was great show, folks. A really great show. Seriously, y’all should listen. 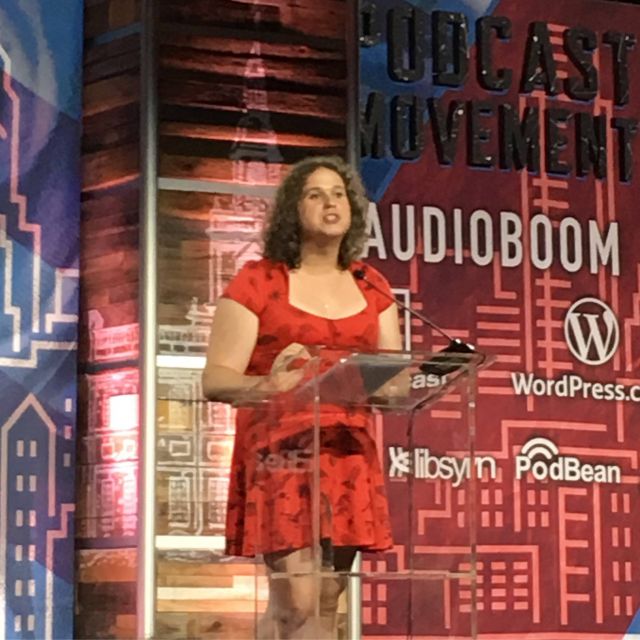 Speaking of podcasting, I had the honor of inducting Dr. Pamela Gay of the Astronomy Cast into the Podcast Hall of Fame. I gave a very good speech (I know this because several people came up to me afterwards and told me it was a very good speech, so, you know, they’re probably right). It was an absolutely wonderful experience. Seriously, if you’re ever asked to induct someone into a hall of fame, do it. Five stars, would induct again. 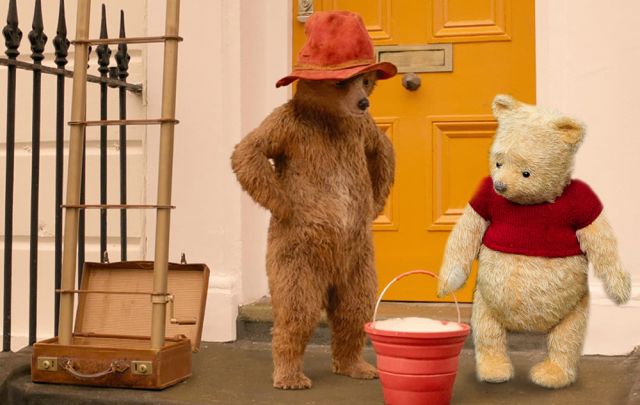 WINNIE THE POOH: Not really. It is hard to think over the rumblings of my tummy.

PADDINGTON: Oh! I might be able to help, then. I have some marmalade.

PADDINGTON: Yes. But also no.

WINNIE THE POOH: I see.

WINNIE THE POOH: No.

Also for Quirk, Sherlock Holmes and the Case of Too Many Adaptations, where Holmes and Watson imagine what future adaptations of their lives would be like.

WATSON: Well, I imagine that a motion picture version would not be out of the question, given sufficient advances in technology. Say, 100 years from now.

HOLMES: I dare say there will be much quicker advances in motion pictures far quicker than that. But as I do not have a case at the moment, I will indulge your intellectual exercise. I posit that in 50 years, there will be a series of motion pictures that will cement our identities in the public imagination. They will begin as historical pieces, but will eventually change to take place in the time they were photographed, with villains of the current era.

WATSON: Oh, I like that. Re-invention to keep the stories fresh.

HOLMES: You won’t like these, I’m afraid. You’ll be interpreted as a dunderhead.

Let’s see…classic children’s literature, classic mystery fiction…obviously, the only other places to go is ABBA-based musicals and zombie stories. So I did both at once.

DONNA: (sings to the tune of “Mamma Mia”)
I’ve been dead for while, since I don’t know when
So I thought we were through, but death is not the endLook at me now, a walking corpse.
I don’t know how, but I since I crawled
From that hole
I’m a body without a soul…

On the slightly more serious front, I recently wrote for Bustle about how great Amy Poehler’s Making It is.

While judges Dayna Isom Johnson and Simon Doonan greet the denim-aproned contestants like alien ambassadors from a delightfully glam planet, they are crafters in their own right. They understand the difference between unpolished and purposeful. The crafters are rewarded not for being perfect, but for expressing who they are. One contestant is routinely criticized for making things that are “too chic” without any personality. Another’s cartoony aesthetic is only given poor marks when his pieces don’t come together to support a larger vision.

And I’d be remiss if I didn’t point out that I still have a Patreon and that backers get all sorts of fun stuff. For example, just yesterday, I posted a video of my Importance of Queer Characters In Comics presentation at Balticon 52. So, if you are interested in that, think about becoming a backer.

Summer’s heat still surrounds us, but I can see the glint of Autumn just around the corner. We’ll make it there yet.