If you follow me on social media, you probably remember me talking about how “Pledge Drives” was supposed to go up before “Welcome to the Hidden Almanac,” but was pushed back due to technical difficulties. At the time, I was little upset about it, but now, I’m actually kind of glad this episode ended up where it did. It felt right to open the new season with the Hidden Almanac crossover, and this episode does it’s job as a welcoming to the world of the show.

And what a world, that has such people in it! Listeners will recognize my sister Kate, reprising her role from “How’s It Gonna End?” as my GPR supervisor. Phil Thomas, who also put in a voice for “How’s It Gonna End?” shows up with his West Phillians partner Andy Holman. Jennifer Steen, of the much-missed podcast Jennisodes, is someone I’ve wanted to be on the show since I started looking for other people to voice it.

The real coup of this episode about fake public radio shows is two real public radio people. Edison Carter (not his real name) is an award-winning NPR journalist has done NPR’s Morning Edition in, like, three states now. And Ellen Kushner, in addition to being a beloved fantasy novelist (she wrote the delightful Swordspoint) and a subject for one of J.R. Blackwell’s In Their Own Worlds photos, also did a wonderful show called Sound & Spirit. An archive of over 90 episodes of Sound & Spirit are available online for your listening pleasure, and you and your ears (or whatever you use to listen; I don’t judge) should really take advantage of that. I recommend “Dreams” and “Tricksters,” but every one I’ve listened to so far has been great, so I imagine you can’t go wrong.

I recently saw Alexandro Jodorowsky’s The Holy Mountain, and it has quickly become one of my favorite films. It’s not for everyone–certainly not for anyone who has problems with plots that are barely there and weirdness for weirdness’s sake–and for all it’s dizzying heights, there are some pretty dismal lows. But it does have a scene where some meticulously-costumed iguanas and toads reinact the Spanish Conquest of Mexico (you can watch it here, with film’s score replaced by Apocalyptica’s cover of “Fade to Black”) and if you can’t see the brilliance in that, I’ve got nothing for you.

Yes, this is going to be referenced in an upcoming episode.

No, not in the way you think.

Actually, maybe in the way you think. You folks are pretty smart. You’ve probably got a lot of what I’m setting up already figured out.

New episodes mean a new Shirt of the Month! And for March, for your sartorial pleasure, we have none other than the glaring visage of Reverend Mord! 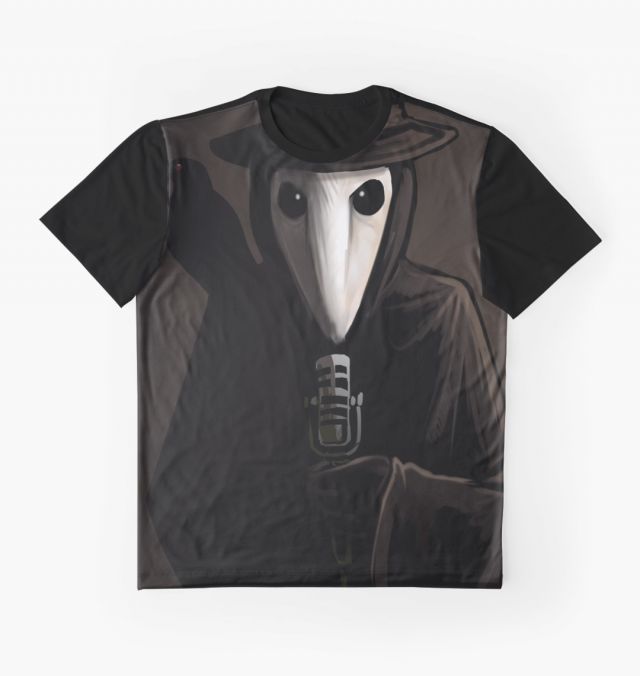 Who wouldn’t want that on your chest?

I’m taking votes on what the Shirt of the Month should be for April. Make your voice heard! I’m curious as which one of these shirts you folks like the most.

There is, of course, a possibility of a three-way tie. I don’t know what I’m going to do if that happens.